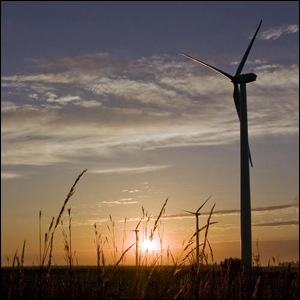 How does a state advance, in just a few years, from having no installed wind capacity to having more than 1,000 MW of installed capacity? Wind resource maps are among the most valuable tools used by the Wind Powering America (WPA) Project team to initiate state-based communication efforts about wind energy development. Stakeholders, including government officials and wind developers, use the maps to determine whether and how wind energy can benefit their states and territories and to identify promising project locations.

In Indiana, an updated wind resource map played a significant role in fostering wind energy development. During the compilation of the U.S. Department of Energy's (DOE's) 20% Wind Energy by 2030 report, researchers at the National Renewable Energy Laboratory (NREL) were tasked with updating wind resource maps, including one for Indiana. The new Indiana map showed considerably more wind resource potential (especially at 70 m and 100 m above ground) than indicated by the previous map detailing the resource at a height of 50 m. In January 2006, Dennis Elliott, NREL's principal wind resource assessment scientist, testified before Indiana's House Utilities Commission that Indiana has at least 40,000 MW of wind energy potential, challenging the notion that Indiana is a "coal state" that lacks sufficient wind resources for electricity generation.

Fast-forward four years and wind energy development in Indiana is in full swing.