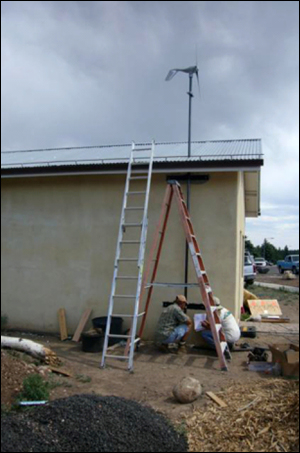 The wind turbine along with a photovoltaic system will be used to power the school's off-grid greenhouse, as well as provide real-life project data that students can learn from.

With its first project complete and more on the horizon, Arizona is making its mark and contributing to the long list of Wind Powering America's Wind for Schools project installations. The new wind turbine along with a photovoltaic system at Ponderosa High School (PHS) in Flagstaff will be used to power the school's off-grid greenhouse, as well as provide real-life project data that students can learn from.

PHS principal David Ross feels that the wind-and-solar hybrid system presents an opportunity for the Ponderosa students and the school. PHS is an alternative high school that helps nontraditional students achieve a high school diploma or a GED. The school's approximately 75 students range in age from 17 to 20, and the majority are Native American or Hispanic, mostly from a lower socioeconomic group.

"We're pretty unique," Ross said. "Part of our responsibility is the County Juvenile Detention Center. We have students who come from there. As part of the transition program, they leave detention and try to get on their feet again, get registered in some classes. Those students have been working at the greenhouse and working hands-on at other parts of the school."

Planning for the Ponderosa project started in summer 2010, the same time that the Arizona Wind for Schools project began. While most schools in the Wind for Schools project utilize the Skystream wind turbine, this installation's needs were small enough to utilize a 160-watt Air Breeze turbine. Southwest Windpower donated the turbine, and combined with the solar system, it will power lights, a water pump, and automatic window louvers for the greenhouse.

Northern Arizona University (NAU), home to Arizona's Wind for Schools project, facilitated the turbine installation. NAU assistant professor Allison Kipple worked with her electrical engineering students to help design and install the project. Kipple feels that the hands-on approach is an important experience for the NAU students. The group of 13 was divided into two teams, one working on the solar portion and the other working on the wind energy segment. The NAU students also taught renewable energy concepts to the high school students.

According to Kipple, the interaction between NAU students and high school students began when teachers approached Mansel Nelson, program coordinator at NAU's Institute for Tribal Environmental Professionals (ITEP) for renewable energy power generation activities. ITEP, established at NAU in 1992, has an entire program dedicated to environmental education with students in grades K-12. Nelson, whose background is in chemistry and environmental science, hired some of Kipple's students to go to the schools with him and help.

Kipple believes that because the high school students and the NAU students were almost the same age, this allowed for a level of interaction that may not have otherwise happened.

"Mansel and I noticed that the high school students can see themselves in the college students. When Mansel and I went, it was hard for the students to identify with us. He's Native American and I'm female, so maybe they can kind of do that, but when a college student in jeans with holes in them goes out there, they can relate. They look at them and say, 'I can do that.' It seems to be a completely different mindset," Kipple said.

Kipple also felt that the NAU students were able to take something away from the experience.

"I think that my students were re-inspired about their decision to go into engineering," Kipple said. "It's their junior year; they're bogged down in course work. Then the high school students ask them, 'What kind of projects have you done in school?' And we have a lot of design projects, so they talk about that, and the younger students think it's cool. My students seem to get proud and realize what they've accomplished since high school. It kind of makes them re-energized about pursuing engineering," Kipple said.

Karin Wadsack, state facilitator for the Arizona Wind for Schools project and research assistant at NAU, has worked on establishing Wind for Schools in Arizona since 2010. Prior to signing the Wind for Schools contract in August of that year, Wadsack had already sent an Arizona representative to a Wind Senators training course.

The Wind Senators program, administered by the KidWind Project, trains teachers in order to encourage other educators, schools, and communities to incorporate more wind energy science and technology into classrooms throughout the country.

Due to the early experience with the classroom, a partnership with ITEP, and the lessons learned from the experiences of other Wind for Schools states, the initial focus of the Arizona program was to enter the classroom and educate rather than rush toward installations.

"In some ways, there is so much more bang for your buck in getting into the classroom and helping teachers implement something that they want to implement, than there is for fundraising for installations. Of course I wanted to fundraise, I wanted to see installations in the ground, and I wanted to see students use the data from the installations, but I knew that was going to take some time when we first started the program," Wadsack said.

The PHS installation was not without complications. The most difficult part of the process, according to Kipple, was obtaining the permits for the turbine. Students began working on the permitting process in late March, but due to the late start, the amount of time needed, and the semester ending, Kipple devoted a lot of her time to the task.

Wadsack feels that the experience was a special one, not only because it was Arizona's first Wind for Schools installation, but also because of the individuals involved and the fact that it was PHS.

"The PHS administrators have really taken on projects like the greenhouse and the renewable energy installation and a number of others around their campus in order to make it a school of opportunity and a school that's a great example for others, because it's not just a school where you go when you get kicked out of one of the other schools in the area. I think that having this installation there is very special because it's providing different opportunities for these students," Wadsack said.

Arizona is the second state in 2011 to install its first Wind for Schools turbine. The first state was Virginia with the Northumberland Middle School turbine.

Funded through the U.S. Department of Energy's Wind Powering America initiative, the Wind for Schools project works to raise awareness in rural America about the benefits of wind energy while increasing the wind knowledge base of future leaders of our communities, states, and nation. 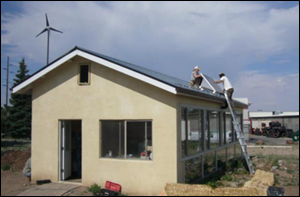 The Ponderosa High School administrators have taken on projects like the greenhouse and the renewable energy installation and a number of others around their campus in order to make it a school of opportunity and a school that's a great example for others.