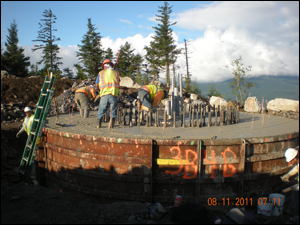 Workers prepare a turbine base at the Granite Reliable Power Wind Project.

Thanks to $168.9 million in Section 1705 funding from the Loan Program Office at the U.S. Department of Energy (DOE), New Hampshire's Granite Reliable Power Wind Project is approaching completion and will boost the capacity of wind energy produced by the "Live Free or Die" state from 25.5 megawatts (MW) to 124.5 MW.

Funded through the American Recovery and Reinvestment Act of 2009, Section 1705 is designed to address current economic conditions by helping to fund "shovel ready" projects.

The Granite Reliable Power Wind Project is the fourth wind project to receive a loan guarantee from this program. The other three projects are the Kahaku Wind Power Project, the Record Hill Wind Project, and the Caithness Shepherds Flat Wind Project (which upon completion will be the largest wind farm in the world, with a generating capacity of 845 MW).

According to the Loan Programs Office, a loan guarantee is "a contractual obligation between the government, private creditors, and a borrower—such as banks and other commercial loan institutions—that the Federal Government will cover the borrower's debt obligation in the event that the borrower defaults."

In 2007, development began on the 99-MW project, with permitting following in 2008 and construction starting in early 2011. Construction is expected to be complete by the end of 2011.

According to Brookfield Renewable Power, majority owner of the wind farm, peak construction occurred in September, with approximately 250 people on site. The project will average 200 workers during the remaining construction period and will employ eight individuals in operations and maintenance positions once construction is complete.

Beyond jobs, the project will benefit the local tax base by providing $495,000 annually in payments in lieu of taxes (PILOT).

According to Sue Collins, county administrator of Coös County, the direct impact of the PILOT will vary from year to year, but the payments will benefit the county as a whole.

"The bottom line is, all property tax payers in Coös County will benefit because of this project," Collins said.

According to Brookfield Renewable Power, tax payments are also made to the town of Dummer.

An additional benefit created by the wind farm is the conservation of high-elevation forest. In March 2009, Granite Reliable agreed to give 1,735 acres of land to the state and $750,000 to purchase additional acreage for conservation.

Granite Reliable also gave $200,000 to the New Hampshire Fish and Game Department to study the project's impacts on American martens, Bicknell's thrush, and other wildlife species of concern.

Kim Osmars, chief operating officer for Brookfield Renewable Power's U.S. operations, believes that the local community and contractors involved in the project have been essential to the successful completion of the wind farm.

"Brookfield and our partner Freshet are very excited to be on the cusp of completing construction on New Hampshire's largest wind project. We are especially pleased to be working with so many local and New England subcontractors who are focused on safely building clean energy for New Hampshire. We are confident that the investment in the Granite Reliable wind project will have ongoing benefits to Coös County and the region as a whole," Osmars said.

"Certainly the project is helping move New England forward in overall wind capacity, helping the region keep up with its renewable portfolio standard targets. Without this project coming online, the region would probably fall a little short of its goals," Grace said.

The Loan Programs Office has committed nearly $40 billion to more than 40 clean energy projects. These projects create or save more than 64,000 jobs across 38 states. 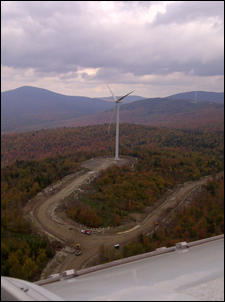