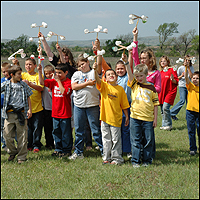 Q. Tell us a little about Western Farmers Electric Cooperative.

A. In existence for more than 62 years, Western Farmers Electric Cooperative is Oklahoma's largest locally owned power supply system. Western Farmers Electric Cooperative is a generation and transmission cooperative that provides essential electric service to 19 member-owner cooperatives, Altus Air Force Base, and other power users. We serve about three-fourths of the rural portions of Oklahoma, even though we don't serve retail customers.

Q. How did Western Farmers become involved with renewables and wind in particular?

A. I've been here for 27 ½ years, and hydropower has been part of our generation mix since before I got here. It's our cheapest source of electricity for our member owners.

We studied wind and found out that it was also a good choice for our member owners because of the economic advantages. We signed the first power purchase agreement in the state of Oklahoma with Zilkha Renewable Energy in January 2003. The co-ops led the way. We started taking test energy from the 74.25-megawatt Blue Canyon Wind Farm on November 2 of the same year. It was a massive, rapid undertaking driven by the pending expiration of the Production Tax Credit. The site was declared commercial on December 23, 2003. In 2004, the first full year of the project, we generated approximately 265,000 megawatt-hours.

The Production Tax Credit allows us to pass economic benefits on to our owners. The gas market is so volatile. Wind gives us another cheaper source of generation and diversifies our generation mix. Now we have water, wind, coal, natural gas, and backup diesel potential (we don't like to use diesel, but sometimes it's cheaper than gas).

Our prediction for 2004 was that wind would fill about 5% of our energy requirements. As it turned out, it only filled about 4% because our demand was greater than what we anticipated. And in 2004 about 15% of our energy requirements came from hydropower because it was a great water year. We're pretty darn green—14% to 20% of the energy we deliver to our customers is generated with either wind or water.

A. The bottom line is that rural electric co-ops are extremely supportive of the environment and renewable energy as long as it makes economic sense for their member owners. We have to deliver reliable service at the lowest possible cost to our member owners.

One operational difficulty is the variability of wind. You can't have a huge percentage of wind in your generation mix because it's difficult to predict and can't presently be stored economically. Last week we celebrated Earth Day at Blue Canyon, and I told a visiting group of students that if they want to get rich, they should figure out a way to economically store electricity for use when we need it.

Another operational difficulty is that transmission is extremely limited and since it is regulated, there is very little incentive for utility companies to build new transmission lines. Some of the best wind resources can be found in the panhandle area of Texas and Oklahoma, but there are limited transmission resources because few people live there. We need incentives for utilities to build transmission, and then wind farms would follow.

Q. What are your plans for the future regarding renewables and wind?

A. We currently have no plans to expand the amount of wind in our generation mix. That's not a negative statement about wind. Oklahoma has a great wind resource that presents many opportunities, but we've learned that the demand curve for electricity is exactly opposite the supply curve for wind. If you can back down expensive gas, wind energy is a good thing. It's not economically feasible if wind backs down cheaper energy like coal.