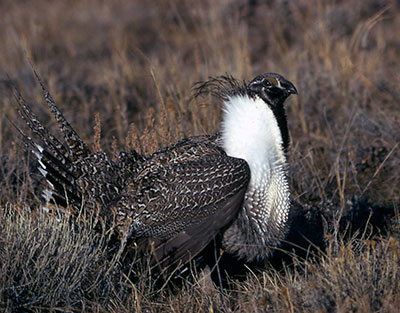 A sage grouse sitting in grassland. Photo from NREL

Unlike their predecessor, today’s wind turbines pose little hazard to birds. Today’s wind turbines are larger and are spaced farther apart than their predecessors. Because of their large size, we need fewer of them to produce the same amount of power. Their blades spin more slowly, and they are mounted on tubular towers rather than lattice towers so birds cannot perch on the tower.

However, like all man-made structures, wind turbines have the potential to impact birds in two ways: the blunt impact of avian species striking the wind turbine and habitat disruption.

In the forefront of discussions around environmental impacts of wind energy projects is the interaction of wind farms with birds of particular concern to wildlife agencies: migrating and endangered species. As a result of this concern, the U.S. Fish and Wildlife Service Wind Turbine Guidelines Advisory Committee issued land-based wind energy guidelines in March 2012 regarding the development of wind energy projects and compliance with the Endangered Species Act and the Migratory Bird Treaty Act.

As summarized in the report, the committee’s guidelines use a “tiered approach” for assessing potential impacts to wildlife and their habitats:

This tiered framework allows a wind project developer to determine whether sufficient information exists to make a decision, whether and/or how to proceed with project development, or whether additional information that would be gathered at a subsequent tier is necessary to make those decisions.

The committee agrees that incentives should be available to those developers who demonstrate due care by voluntarily implementing the tiered approach and coordinate with the U.S. Fish and Wildlife Service early and throughout the tiered process. They also recognize substantial variability among project sites and recommend methods and metrics that should be applied on a site-by-site basis while maintaining consistency in the overall tiered process.