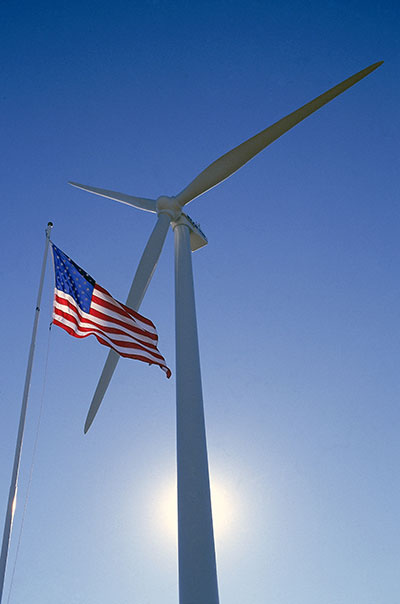 Early coordination with the Federal Aviation Administration, National Oceanic and Atmospheric Administration, Department of Homeland Security, and U.S. Department of Defense during the siting process can help prevent a radar interference issue long before a wind plant is built. Photo from NREL

Wind energy is one of the fastest-growing sources of new electricity supply in the United States. As wind development continues to grow and expand to new areas of the country, the likelihood that some turbines will be located within the line of sight of radar systems also increases. If not mitigated, such wind development can cause potential interference for radar systems involved in air traffic control, weather forecasting, homeland security, and national defense missions. Learn more at the Energy Department’s Offshore Wind Turbine Radar Interference Mitigation Webinar Series.

Interagency Memorandum of Understanding and the WTRIM Working Group

Under a Memorandum of Understanding signed in 2014 and building off the successful Interagency Field Test and Evaluation (IFT&E) of Wind Turbine-Radar Interference Mitigation Technologies, federal agencies established the Wind Turbine Radar Interference Mitigation (WTRIM) Working Group to address these conflicts. Learn about the participating agencies, their goals, and the laboratories assisting with these efforts.

Early coordination with the Federal Aviation Administration, National Oceanic and Atmospheric Administration, Department of Homeland Security, and U.S. Department of Defense during the siting process can help prevent an interference issue long before a wind plant is built. Learn about the structured formal review process, the National Oceanic and Atmospheric Administration’s early review process, and online tools available to assist wind developers with preliminary site screenings before engaging with federal agencies.

If potential interference issues are identified during the formal review process, a variety of mitigation approaches are available to help minimize wind energy’s impact on radar, including the following siting practices:

Siting alone may not eliminate impacts or reduce them to an acceptable level. In these cases, other mitigation techniques, including the deployment of new radar-related software upgrades and/or hardware, can also reduce potential wind energy impacts on radar operations. Examples include:

In most cases, siting and other mitigations have resolved conflicts and allowed wind projects to co-exist effectively with radar missions. However, in some proposed locations, wind turbines will cause disruptive radar interference that cannot be effectively mitigated. At such sites, wind development would probably not proceed.